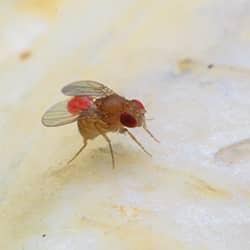 Setting these two insects next to each other, assuming they would stay still, you would immediately see a difference in appearance between the insects we know as the house fly and the fruit fly. While both have the characteristics of an insect: two pairs of legs, three body parts (head, thorax, and abdomen) and two antennae, they vary in many ways. House flies are dark gray, oval in shape, and between ⅛ and ¼ inches long. Fruit flies are tan, a thin oval shape, and ⅛ of an inch long. But this difference in appearance isn't the most important difference we need to take note of.

When it comes to threatening everyone in your home with illness, the house fly stands head and shoulders above the fruit fly. Studies have estimated that house flies are able to transmit at least 65 diseases. Just a handful of these diseases are cholera, dysentery, typhoid fever, poliomyelitis, and tularemia. This is because house flies hang out in some really dirty places. They can be found on a dead carcass on the side of the road, in a dumpster behind a fish factory, on the wall of a sewer system, and on top of feces left by pets, livestock and other animals. And moments after traipsing through filth, they could be perched on top of your hamburger. If you've heard that flies have the nasty habit of regurgitating on food when they feed, that is not the worst of it.

In the dirty places house flies crawl around, tiny organisms called bacteria can be found. Some of the bacterial organisms they come into contact with can make us sick. The list of bacterial illnesses is a long one. Many of them you have probably heard of such as Salmonella and E. coli.

Since house flies have the ability to fly, as their name implies, they are able to pick up harmful bacteria from dirty places and bring them to places that should remain clean, places like your cutting board or fruit sitting in a bowl on the table. This sets up the conditions for disease transmission to occur.

Fruit flies don't hang out in all of the same places house flies do. These flies are more attracted to ripening fruit than they are to a dead animal lying in the bushes just outside of your kitchen window. But that doesn't mean fruit flies are harmless. In scientific studies, these flies have been shown to be mechanical vectors of bacteria. Their ability to transmit diseases is linked to the size of their population and the level of sanitation in the environment they are infestating.

If you're dealing with either of these types of fly, it is important to get them under control as soon as possible. For quick and effective fly control in Franklin, or our Middle Tennessee service area, know that the friendly pest professionals at All-American Pest Control are standing by to help.