The Difference Between Silverfish and Earwigs

Home › Blog › The Difference Between Silverfish and Earwigs 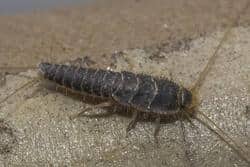 There are a lot of bugs in Middle Tennessee. So, if you're having trouble figuring out which is which, we certainly understand. But few people have trouble telling the difference between an earwig and a silverfish. Earwigs can range in size from ¼ of an inch to 1 inch. They have dark brown bodies and ominous pincers on the tips their abdomens. Silverfish are generally smaller, at about ½ an inch to an inch. They have a silver coloration, and a distinct teardrop shape. It is usually those scary pincers on the earwig that help people figure out which of these two insects they're dealing with. If you're seeing either of these two pests in your home, it is important to tell them apart. You wouldn't think so to look at them but silverfish are far more of a threat than earwigs when they get into your home.

Earwigs are garden pests. They're really not much of a problem when they get inside. They don't bite, they don't spread illness, and they don't damage property. Most people usually want them removed from their homes because of the reputation they have of getting into the ears of sleeping people and tunneling to their brains. Let us set your mind at ease. While it is possible for an earwig to crawl into your ears because they like moist dark places, they're not going to harm you. They don't lay their eggs in there and they don't tunnel inside humans; soil is really the only thing they will tunnel through. Your ear canal is not a suitable living environment for an earwig. The things to consider with earwigs are that they can produce a pungent-smelling liquid when they get scared and that they can be destructive to plants. And, of course, they're just plain creepy.

Silverfish are another problem altogether. If you're seeing silverfish in your home, you should be aware that these insects can damage many of the items found in your home. They can nibble on clothing, photos, books, paintings, old letters, newspapers, ink, upholstered furniture, and more. If they nibble on an important item, they may do damage that can't be repaired, like nibbling your great aunt right out of the only photo you have of her.

While these two pests have many differences, they both have one thing in common; they can be controlled with ongoing Perimeter PLUS pest control from All-American. For more information, or to set up an appointment to meet with one of our experienced service professionals, reach out to us.