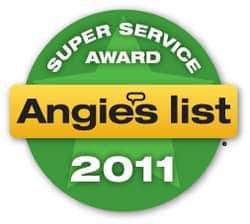 All-American Pest Control of Nashville, TN has been awarded the prestigious 2011 Angie’s List Super Service Award, an honor bestowed annually on approximately 5 percent of all the businesses rated on the nation’s leading provider of consumer reviews on local service companies.

“Only a fraction of the businesses rated on Angie’s List can claim the sterling customer service record of being a Super Service Award winner because we set a high bar,” said Angie’s List Founder Angie Hicks. “The fact that All-American Pest Control can claim Super Service Award status two years in a row (2010 & 2011) speaks volumes about its dedication to consumers.”

Service business ratings are updated daily on Angie’s List, but members can find the 2011 Super Service Award logo next to business names in search results on AngiesList.com.