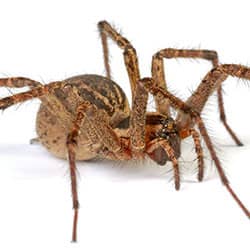 Wolf spiders are interesting arachnids. From their ability to hide in plain sight to how they communicate, they're really quite fascinating. They're also a common and lately increasing pest problem here in Middle Tennessee, which is why we decided a blog post about these eight legged creatures was timely. Read on to learn more about wolf spiders.

Now that you know all about the wolf spider, there is just one more fact that you need. If you find that wolf spiders have invaded your home, it is certain that you will not want them to remain there. The most efficient way to keep wolf spiders out of your Middle Tennessee home is with year-round home pest control services from All-American Pest Control. Our friendly experts are trained on proper application of materials and know where these pests lurk and how they get inside. You can count on our team to set up a barrier of protection around your home that controls wolf spiders already moving in and around your home as well as follow up with regularly scheduled visits that will prevent future activity. Serving Nashville, Brentwood, and Hendersonville as well as communities throughout Middle Tennessee, please contact All-American Pest Control today to schedule your free home evaluation and be sure to ask us about the money-saving “Dave Ramsey Special.”