The 411 On Tennessee Spiders 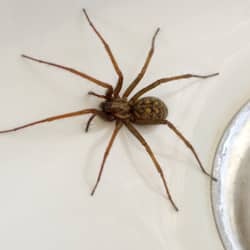 Spiders are most assuredly an 'acquired taste'. No, you’re not going to eat or drink them, but not many of us actually appreciate them or tolerate them enough to care about any specifications regarding them. We just want them away from us and out of the house! I saw a joke the other day that said, "When I was a child I thought there were only two types of spiders, one was 'kill it kill it kill it' and the other was 'it's on me! Oh my gosh, it's on me; kill it kill it kill it'. As silly as that sounds, many of us are familiar with those feelings. We have given in to the creepy and scary reputation that Hollywood has created.

Here in Tennessee, we have a few different major species of spiders that call this great state home. Here's a brief peek at these spiders, what they look like, and whether we should really be as afraid of them as we are.

Per their name, these spiders are the most common ones to find hanging around inside buildings. These are the culprits that leave the webs in the corners of ceilings, doorways, basements, and attics. They are usually a yellow or brown color with a white abdomen. While they can bite, their venom generally does not cause a reaction in people.

As you can tell by their name these spiders like to spend time where you can't easily see them, like in your attic, basement, or crawl space. These guys are commonly called "Daddy long legs" because they have such long and spindly legs. These spiders have small and weak mouths so it's all but impossible for them to bite humans. They typically stay in one place and don't like to be close to people or to bother them.

These spiders are known by the round "orbital' wheel-like webs that they weave. They are commonly called 'Garden spiders' because that's where they are most usually found. They are anywhere from light brown to black and have long hairy looking legs. These garden lurkers are not usually aggressive and typically only bite when absolutely necessary for defending themselves. Their bite is not poisonous, but may cause a raised red area. While not generally found indoors, these spiders do hang out near porch lights, windows, and doors because other insects are drawn to the light in these areas.

These spiders are also most commonly found in garden areas. They are large, approximately 30mm long, and are black with bright yellow coloration on their abdomen. They create intricate circular webs with zigzag patterns. These big spiders, just like Orb spiders, aren't typically considered aggressive and only bite when necessary. Their bite can also leave an irritated welt. These spiders will follow suit of the Orb spiders again by being discovered around light sources.

Wolf spiders are a dark brown with cream or yellow markings on them. They are an aggressive spider that moves quite quickly along the ground in search of or pursuing their prey. These spiders do not create webs; they sit and wait for their prey to go by and then pursue it. They generally are found outdoors hiding under leaf piles, landscaping timbers, rocks, woodpiles, and other similar places. They can bite, but they are not interested in pursuing or biting people. Also, their venom is usually a non-issue with people.

Brown recluse spiders, as their name suggests, are brown spiders that range in size from 1/4" to 3/4". These spiders like to hide away in dark, quiet places. They are easily identified by the violin-shaped mark on the top of their body. These spiders are not aggressive, but they will bite when threatened. Their bite is venomous, and can cause varied issues to the victim depending on the condition of their immune system. The first and most common symptom is redness around the bite and blistering. If you believe that you have been bitten by a brown recluse spider, it is best to seek medical advice as soon as possible. And, if possible, bring the spider with you for proper identification.

The infamous black widow spider is a black spider with a distinct orange or red hourglass shape on its belly. This spider is commonly found in warm, closed-in, dark areas. The bite of these spiders is considered venomous, and if you are bitten you should immediately seek medical attention making sure to bring the spider with you for identification purposes if possible.

The easiest, most assured and way to lessen the amount of spiders that you come in contact with in Tennessee is to partner up with the professional pest control team here at All-American Pest Control. Our Perimeter Plus Pest Control program is designed to provide year-round control for spiders and all of Tennessee’s common household pests. Acquiring your 'taste' or appreciation for spiders isn't required when you have us on your side. Contact us today for your free in-home evaluation and start appreciating how glorious life is when it's pest-free!