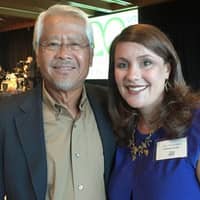 Often we hear references to the people that are behind the scenes.  These people are the ones who make things happen; they are the spark or idea from inventions to services, to ghost writers, marketing designers, camera men, directors etc.  Without these people and their creative skills many of the facets of our lives would either not exist today, or at the least be a lot different.  We rely on their vision, natural intelligence, drive, and creativity to make our lives better.  Often these behind the scenes positions aren’t significantly recognized for their efforts.  We may only know of the benefits of their work and not them personally.  This may the case with Dr. Nan Yao Su and Sentricon®.
Dr. Nan Yao Su, an entomology professor at Fort Lauderdale Research and Education Center and part of the University of Florida’s Institute of Food and Agricultural Sciences, is recognized internationally as an authority on termites.  He has a Bachelors and Masters degree in Science and a Ph.D. in entomology.  He joined the University of Florida in 1984 and has been an entomology professor since 1994.  His research has focused primarily on subterranean termites.  He recognized that the traditional way of protecting structures against these destructive insects was not ever going to stop the problem.  He felt that treating the structures and the surrounding grounds with pesticides was just putting a band-aid on the symptom and not addressing the real issue; the termites themselves.  He studied and researched the behaviors of subterranean termites and deduced that stopping them could be done by the foraging worker termites themselves if they were presented with the right ‘bait’.
This bait needed to be attractive enough that they would want to select it for a food source, and potent enough to hurt them, but also slow acting to give it time to travel back to the queen.  Seemed like a big task, but as he has proved, it wasn’t an impossible one.  Between 1980-1990 Dr. Su and other researchers and colleagues from Dow Chemical Company studied and began to better understand the habits of subterranean termites and develop not only a chemical that would do just as they hoped, they also designed a safe delivery system that rocked the pest control world with its simplicity and minimal pesticide use.  The Sentricon® System was and is safer than anyone could have ever dared to hope for.  The days of saturating the ground around a house with chemicals to stop termite damage is over.  For example, from 2007-2011 he advised on a project fighting termites in China and reduced pesticide use by 240 metric tons!
From the first study sites of 1993 to today, the Sentricon System has been used successfully around the world to protect properties of all shapes, sizes, and historical importance.  Places such as the Statue of Liberty, U.S. Capital building, the White House, Independence Hall and the Alamo, to name a few. All this was made possible by one man’s inquisitive mind.  He questioned the standard for treating subterranean termites in Florida and from there it just blossomed, and the rest, as they say, is history.  Thank you, Dr. Su, for following your inquisitive mind; for being creative; and for all your hours, days, and years of research.  Here at All-American Pest Control, we are proud to offer the Sentricon® Termite Colony Elimination System to our clients.  We trust in Dr. Su and his vision, and you can trust in ours.  Contact us today to learn more about how we can keep these destructive pests away from your home or business.