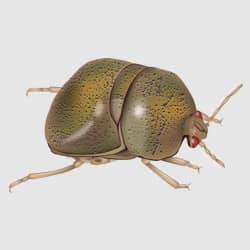 Let me start out by saying, yes, there has been a confirmed kudzu bug in Davidson County, but no there has not been an “invasion”…. just yet.  Like the stink bug and Asian lady beetle who are not native to our area, but in recent years have soared in numbers, it could only be a matter of time before the kudzu bug does the same, so be on the lookout.

Believe it or not there are some people that don’t know what the kudzu bug is, and they have no idea what kudzu is!  Kudzu and the kudzu bug, aka the bean plataspid, are both foreign invaders here in our country.  We intentionally introduced one of these invaders, but the other one seems to have found its way here all on its own.  Both of them are damaging our crops and our lands.  Last year they made their debut here in our neck of the woods.

They were discovered as far north as Rutherford County and then this year they were also spotted in Davidson County, near Vanderbilt One Hundred Oaks.

The kudzu plant originated in Asia, and was brought to the United States as part of the World’s Fair in 1876 at the Central Exposition in Philadelphia and again in 1883 at the New Orleans Exposition.  It was marketed in the Southeast as an ornamental plant that could be used to shade porches, a high protein animal food source, and also a cover plant to help prevent soil erosion.  Like so many other plants, animals, and insects that we introduce to new habitats, the kudzu plant has become an evasive and out of control ‘Federal Noxious Weed’, per the United States Department of Agriculture in 1997.  As of today, this noxious weed is thought to have covered 7,400,000 acres of land in the Southeastern U.S.  It has been named ‘the vine that ate the south.’

The kudzu bug was first recorded here in the states in the fall of 2009 in Georgia.  The speculation is that it accidentally came in through the Atlanta airport.  These bugs like to feed from the kudzu plant.  They feed off the sap in the plant with their sucking mouth parts.  While they don’t actually eat the leaves, these sap suckers can eventually kill the plant that they are feeding on.  This is good news for those of us in the southeast dealing with the kudzu weed overgrowth, but these plant sap sucking insects have a taste for a lot more than just kudzu sap.  They enjoy feasting on other plants like:

These bugs are most certainly an agricultural pest that can kill and damage acres and acres of soybean crops.  They are also a nuisance pest when they congregate on the sides of houses in the fall looking for a warm crack or crevice to spend the winter in.  Per the University of Tennessee Institute of Agriculture, they seem to be especially attracted to white siding, and the best way to keep them out of your home or business is to seal up the buildings as best as possible and do perimeter sprays, especially around potential entry points like doors and windows.

The good news is that kudzu bugs are likely not an issue for you now, but be on the lookout next fall and the falls to come and rest assured knowing that at All American we’re ready for them with our Perimeter PLUS Pest Control Services.  There’s a reason that this is our most popular service because it works!  This year round service will reduce all the common pests that pester us here in Tennessee, inside your home and outside, and this most assuredly includes the kudzu bug.  Stop battling this foreign invader on your own and let the experts here at All-American keep them out of your house and out of your life.  Contact us today!