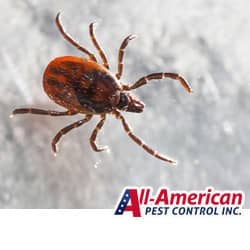 The beauty and excitement of the spring and summer season is sometimes tainted by the presence of ticks and the concern of a tick bite as well as some of the diseases for which they are known to carry. There are at least 15 different types of ticks in Tennessee (click here to learn more about the different ticks) but only a few of those species are ever likely to affect humans. The ticks people are most likely to encounter are the American dog tick, lone star tick, blacklegged (deer) tick, brown dog tick and winter tick.

The American dog tick is undoubtedly the most commonly encountered tick and feeds on people and medium to large mammals, like dogs and raccoons. However, it is the blacklegged tick, also known as the deer tick, which raises the most concern as it can transmit Lyme disease. These ticks are most commonly found in wooded areas.

Lyme disease is the most common tick-infecting disease in the Northern Hemisphere. This disease is transmitted to humans through the process of being bitten by infected ticks. The Lyme disease is named after the town of Lyme, Connecticut, where a number of cases were diagnosed in 1975. If treated with proper choice of antibiotics in the early stages of the disease, one will likely recover completely. However, in later and more advanced stages, response to treatment will be slower but the majority of people with Lyme disease will have complete recovery with appropriate treatment.

It is important to recognize the symptoms of Lyme disease in order to identify the disease in its earliest stage of development. There are very early signs and symptoms that may occur within a month after having been infected. This could be a rash that begins to expand around the small bump of a tick bite. This rash, called erythema migrans, forms a red outer ring surrounding a clear area. This is a sure sign of the infection of Lyme disease. Quite often, flu-like symptoms may accompany the rash. These symptoms include fever, chills, excessive fatigue, body aches and headaches.

Later, more advanced signs and symptoms after several weeks to months of being infected may include terrible joint pain and swelling of joints. Your knees will more than likely be affected and the pain may shift back and forth from one knee to the other. Some people may also experience neurological problems. This includes inflammation of the membranes around the brain and can cause temporary paralysis of one side of your face, numbness of limbs and impaired muscle movement. Further symptoms that may not occur as commonly can include heart problems, eye inflammation, hepatitis and severe fatigue.

The concern of diseases like Lyme disease is sufficient cause to use preventive measures to reduce the chances of tick bites. It is best to completely avoid tick-infested areas. If you see several ticks soon after entering a wooded area, turn around and change locations.

When going on hikes, stay in the center of walking trails. Ticks hang on tree branches and tall vegetation and will transfer onto your clothing as you walk by. It is also best to wear light colored clothing when in the woods. This enables you to have a better chance of seeing the tick before it attaches to your skin.

Upon leaving the wooded area, be very diligent in checking your clothes, hair and body for the presence of ticks. When arriving home, take a shower and place clothes in the washer and then dry on hot cycle. There are also repellents that can be applied to your clothing prior to going into the woods that will discourage ticks as well as tick treatment for yard areas. Visit our tick control page to learn more about treatment for this pest.  For more information you can always give us a shout!