The 3 Most Annoying Fall Pests (Plus, How To Avoid Them)

Home › Blog › The 3 Most Annoying Fall Pests (Plus, How To Avoid Them) 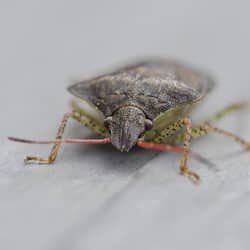 The title of this blog should be, "Arrrrggggghhhhh". When I think of stink bugs, asian lady beetles, and boxelder bugs, that is the noise that comes out of my face. They are a plague on humanity. Fortunately, I've learned some things on how to help keep these bugs out. Not just help keep them out of my house, but off it, as well. But first, here is a quick rundown on each of these bugs.

The brown marmorated stink bug, or simply "stink bug", is an agricultural pest, recognizable by its shield shape and brown speckled coloring--that looks like bad television reception. These bugs are generally harmless, but have a nasty viscous liquid in their abdomen that smells horrible and stains fabrics.

This black bug, with its fiery orange trim, can usually be found on boxelder trees, and other maple trees. You don't have to worry too much about being bitten by a boxelder bug--unless you're a plant or a seed. They pile on window sills, climb all over screens, and stain carpets and upholstery when squished.

This beetle looks like her sister the ladybug, only instead of red with jet black polka dots, she is orange. An Asian lady beetle's mouthparts are capable of piercing human skin, but they are generally more interested in eating aphids than humans. The reason these bugs are in the top three most annoying fall pests, is because they're gross in mass quantities. And, like the other two, these bugs can stain if you squish them on fabric.

All three of these bugs are unsightly, especially in mass quantities. And, it is common for all of these bugs to do flybys, which is particularly annoying.

So what can I do about these bugs?

With these common-sense exclusion methods, and a limited use of pesticide, those bugs will choose someone else's house to crawl on this fall. Wouldn't that be nice?