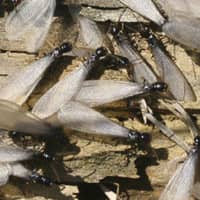 In the United States each year, carpenter ants do millions of dollars in damage. It is never fun to have an ant problem, but the risk to your home is minimal, especially if you catch the infestation early. Termites, on the other hand, cost U.S. property owners billions of dollars each year. And some termite species can render a home unrepairable in as little as three to five years. Knowing the difference between these two house-chewing insects can let you know how worried you should be.

Insects, from the Latin insectum, is a class of invertebrates within the arthropod phylum that have a chitinous exoskeleton, a three-part body, three pairs of jointed legs, compound eyes and one pair of antennae. Termites and ants are both insects and share all of these traits. But they are two very different creatures, even in appearance.

Though both insects produce winged swarmers that are similar in color, you can tell them apart visually.

If you see a stray insect with wings, you may want to take a closer look and determine what it is. Swarms don't last long and termites can silently infest your home. Make sure you are familiar with what winged insects can crawl around on your home. It can be hard to tell between hornets, ant swarmers and termite swarmers. If you see hundreds of winged insects, call a pest control company immediately. You don't need carpenter ants or termites in your home, damage is damage. Always take swarms seriously.