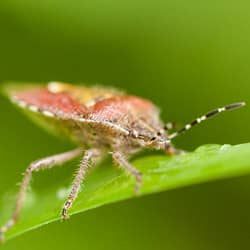 When you think about stink bugs, you probably don’t have much of a reaction. Certainly nothing like that of the thousands of teenage girls that flocked to New York to welcome the Beatles in 1964, talk about pandemonium! No the arrival of stink bugs every fall is lackluster by comparison. It certainly won’t produce the hysteria that the British boy band did back in the day but make no mistake, these annoying pests are here and are likely to invade your home soon (if they haven’t already)!

If you’re not familiar with these fall invaders, stink bugs are those brown bugs that have a shield-like shaped back. Not too big in size, they are about as wide as they are long and as their name indicates, are capable of producing a foul smell when threatened or squished. How offensive it might be to your nose is not black and white, everybody’s sniffer is different after all.

Just like boxelder bugs and a host of other overwintering insects, stink bugs become a problem as the temperatures start to dip. Outside stink bugs are destructive to crops, inside they’re less of a threat and much more of an annoyance. Slipping through cracks and gaps on the exterior, these pests gather together in large numbers.

Right now they’re more likely taking up space on the outside of your home but once it gets colder, you can bet these insects will start looking for access to your home and the many warm places waiting for them inside. So what can you do to stop the onslaught of stink bugs this fall? Seal up any potential entry point on the outside of the home including around windows and doors.

If it’s too late and you’re already noticing these bugs inside, simply give All-American Pest Control a call for help. Offering effective stink bug control in Nashville, Franklin and throughout Middle Tennessee, our pest control specialists get rid of your stink bug problem through targeted treatments applied to areas where these pests hang out.

Don’t want to share your home this fall or winter with bugs? Simply contact the Tennessee pest control professionals at All-American to schedule your free home evaluation! The stink bugs are here but with our help, you don’t have to tolerate their presence in or around your Tennessee home this year.