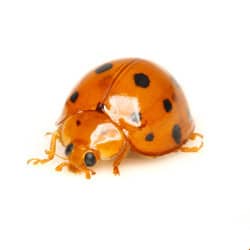 What is a Halloween beetle? Some say it is a mythical creature, both half living and half specter, that enters our world every Halloween to carry children off into the dark night. But people who say this are strange, and should be avoided. Seriously. It would take, like, 800 Halloween beetles to carry an average sized baby off into the woods. That is assuming beetles would even want a baby. Don't get me started on how many beetles it takes to change a diaper. There. Now that we've gotten that out of the way, lets look at what Halloween beetles really are.

The Halloween beetle, from the order Coleoptera and the family Coccinellidae, is more often referred to as the Asian lady beetle. It gets its name, Halloween beetle, because of its orange coloring and jet black polka dots. Though it looks like a ladybug, it is not exactly a ladybug. Asian lady beetles and ladybugs differ in two notable ways. First, ladybugs are red and black, not orange and black. Second, ladybugs have smaller heads and less pronounced white cheeks. Other than that, they're pretty much the same bug. They both love to pile up on your window sills, steps, and wall cracks, and they both love to crawl on your screens, looking for a way in.

What do I do if I have Halloween beetles in my house?

If you only have a couple inside, you can use duct tape or sticky tape to collect them. A dust pan and broom works a little, but lady beetles fly, and this can turn into a pain. If you have more than a few, don't worry, that's nothing a vacuum can't handle. Be prepared to throw the bag out after you're done sucking them up. You don't want to keep it in the house. But, whatever method you use, don't crush them. Lady beetles can stain fabrics.

How do I keep Halloween beetles out?

But, if you must have the lights on, the curtains open, and bright walls on your home, considers having your exterior walls sprayed by a professional. When ladybugs come to crawl all over your walls, it will leave a bad taste in their mouth, and they'll move on to a wall that is less disgusting.

There you have it. Now you know what Halloween beetles are, and how to keep them away. Dazzle your friends this Halloween with your incredible bug knowledge, and enjoy the festivities.