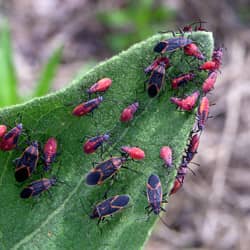 The boxelder bug, named for its love for seed-bearing boxelder trees, is a jet black insect, with bright orange trim. This bug is native to the Western United States, but can also be found all the way down the Eastern Seaboard, and west to Nevada. Wherever there are boxelder trees, you're sure to find boxelder bugs.

You won't typically have any problems with these bugs from the end of spring to the beginning of fall, because boxelder bugs are content to feed on the leaves, flowers, and seeds of boxelder and maple trees. And, occasionally, you will find them feeding on the fruit of apple or plum trees. If you have any of these trees near your house, there is a good chance you deal with these bugs every fall.

Here is what happens. When it starts to get cold, boxelder bugs begin to huddle together to stay warm. At first, you'll find them congregating on the sun-warmed side of rocks, but it isn't long before that large warm exterior wall on your house draws them in. Once they are on your walls, they'll start looking for cracks to overwinter. They don't know it is a house. To them it is like a big rock, made out of wood. Since they overwinter in the cracks and crevices of rocks and trees, it only makes sense for them to crawl inside the cracks and crevices of your home. But once they are in there, it is maddening to get them out.

It is best to protect against boxelders before they get into your home. The excrement from these bugs can stain things like: drapes, clothing, curtains, and bedspreads. With some common-sense bug proofing methods, and limited and focused pesticides, you can protect your home from being infested.

You should also consider an outside treatment to keep boxelder bugs from exploring your walls, in search of holes you might have missed. Our knowledgeable technicians understand the habits of boxelder bugs, and know where to spray, what to spray, and how much to spray. Handling and mixing pesticides can be dangerous if done improperly, and often, after you've spent all that time and money, you still have bugs. Let us work with you to keep boxelder bugs, and other fall invaders, out of your house. The fall invasion is inevitable. Living with boxelder bugs is not.

We can actually enjoy our backyard now thanks to All-American. They worked with us to develop a plan to mist our landscaping on a regular basis and its worked! We now can have guests over and not have to worry about mosquitoes!