Have You Ever Heard Of Red Velvet Ants?

Home › Blog › Have You Ever Heard Of Red Velvet Ants? 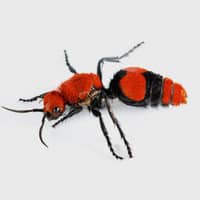 For the most part, ants are pretty nondescript insects. They come and they go from their nest following the same old trail as the ants that went before them. You might even say ants are boring. Of course, there are exceptions like those crazy ants that are known for their erratic behavior or the highly attractive yet rare to Tennessee red velvet ant that just happens to be the subject of this blog post. Have you ever heard of the red velvet ant?

Maybe you’ve never heard of them but have you heard of the cow killer ant? They’re one and the same. It is said a female’s sting is so painful that it could kill a cow. This is definitely not an ant you want to step on barefoot. And speaking of stepping on this ant, they’re almost impossible to squash!

Thankfully red velvet ants aren’t very common here in Middle Tennessee and actually are not even ants but wasps. Unlike yellow jackets and other wasps, these solitary creatures aren’t aggressive and do not cause damage. You won’t find nests like you do with odorous house ants either.

Another interesting fact, red velvet ants are like the supermodels of the insect world. That might be a slight exaggeration but these creatures are known for being highly attractive. Brightly colored, females may appear in shades of yellow and brown or red and black.

So to recap, red velvet ants are good looking bugs that are actually wasps and have earned a intimidating nickname because their sting is so painful but they’re not really a problem for homes and properties in our region.

If you’ve discovered red velvet ants around your property, it’s probably because they’re laying their eggs in the ground nests of bees and other wasps hanging around. And that’s a problem. Red velvet ants do not require control but the same cannot be said of the stinging insects.

To find out how All-American Pest Control can help you resolve pest problems that might attract other insects in and around your home, please contact us.