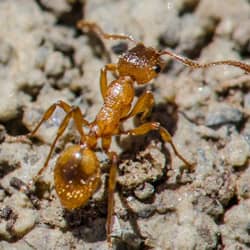 With a name like ‘fire ants’ one can assume there are lots of issues, questions, and concerns surrounding them. These dangerous little insects are moving across the south and taking over many counties. For a list of counties in Tennessee that are affected by these imported destructors click here. As you will see, they are certainly getting around. Here are some of the most frequently asked questions regarding these invasive ants.

Are fire ants dangerous to humans?

Yes. Fire ants are dangerous because of their sting. A sting from a fire ant not only inflicts intense pain, but it can also cause a life-threatening allergic reaction. In the case of a fire ant sting, medical attention should be sought immediately. Fire ants not only attack and sting humans, but they have been known to attack and kill domestic animals and wildlife as well.

Yes. Fire ants are extremely destructive. They can destroy whole fields of crops such as soybeans and seedling corn. They're also attracted to electrical equipment and chew on insulation which can result in short circuits and interference with farm equipment and other machinery. They have shut down traffic signal boxes, air conditioners, and even airport runway lights!

These imported fire ants look a lot like native Tennessee ants. They are about ¼” long and are a reddish brown or blackish red color. They build mounds that can be 10 to 15 inches high above the ground and go underground about three feet. Unlike native Tennessee ants, these ants are very aggressive and will attack any disturbed area of their mound.

Why do I have fire ants?

Fire ants move to a new area in a couple different ways. They could’ve been inadvertently introduced by hitching a ride with plants from a nursery, in bales of hay, or even in a vehicle's electrical wiring. They could also have come from a nearby mature colony. When a colony’s population becomes large, it will produce winged females and males that fly away to mate and start a new colony.

How do I get rid of fire ants?

Fire ants are very territorial and often return to an area over and over again. It is almost impossible to get rid of them completely without the help of a professional pest control service. Here at All-American Pest Control, we offer a specific treatment plan for fire ants. Our stinging and biting insect yard treatments will not only control fire ants, but it will also stop fleas, chiggers, and ticks.

Take back your yard today. Enough is enough. Be part of the solution that is stopping these invasive and dangerous ants by partnering with the experts here at All-American Pest Control. No one should be afraid to go outside because of stinging and biting insects; especially our family and neighbors. Contact us today and schedule your free evaluation.