5 Ways To Pest Proof Your Home This Fall

Home › Blog › 5 Ways To Pest Proof Your Home This Fall 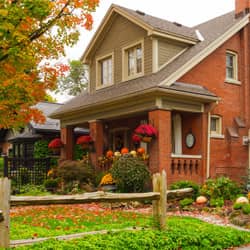 The following is a work of fiction. Any resemblance to bugs living or dead is purely coincidental.

Many fall seasons have come and gone in my little house on Babble Brook Lane, and I think I have seen everything. We've had several skunks live under our deck. We've had a groundhog under the shed and digging in the garden. We've battled spiders, stink bugs, carpenter ants, earwigs, ladybugs, cockroaches, beetles, and centipedes, by the bucketful. And, I've gotten more wasp stings than I care to dwell on--not to mention the thousands of spider and mosquito bites my poor flesh has had to endure. But today, as I sit here sipping my morning coffee taking in the beautiful orange and yellow leaves of fall, I am aware of something most peculiar. There are no ladybugs piled on my sill. There are no stink bugs crawling on the screen in front of me. And I don't detect a single flying insect inside my kitchen. I should be insane right now. But I'm not. So how did I do it? How did I stop the fall invasion? I did one thing--one very important thing. I changed the way I think about bug control. I wish I could say I came up with this revelation on my own, but it was actually the technician from a local pest company who finally got me on track. Here are the five things I learned that changed my life.

It took some effort, and a little retraining, but the bugs are gone--I mean really gone! I think I've seen a couple gnats this fall, and maybe a couple ladybugs, but that's it! Bug proofing my house was the best thing I've ever done. Now I can sit back, sip my coffee, and enjoy the fruits of my labor--as long as I remember to keep that fruit in the fridge until I'm ready to eat it, and to throw it away in a sealed can when I'm done.