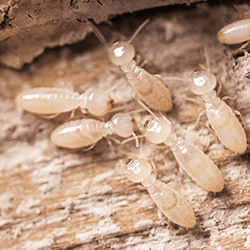 Why are subterranean termites so destructive? It is partly due to the way they attack a man-made structure. They tunnel under the ground, as far as 250 yards, in search of food. When they find it, they come up from the soil and feed on the inside of the food source. One reason they do this is that they have an aversion to light.

Though worker termites live almost entirely in complete darkness, and are considered to be blind, studies have shown that they retreat when exposed to light. This sensitivity to light allows workers to feed right up to the surface of wood without accidentally exposing tunnels the way carpenter bees and carpenter ants do. And, when they do breach tunnel walls, they quickly patch it with mud.

Subterranean termites love the soil and they bring pieces of it into their tunnels so that holes can be patched quickly. They also use soil to build elaborate structures called shelter tubes which they build from the ground to the wood of a home. But these tubes are often created in dark locations, such as under porches, decks, patios, and other structures.

It is extremely difficult to detect subterranean termites, even for experienced professionals. It requires getting into every nook and cranny around a home and squeezing into dirty crawl spaces under a home. If there is a block foundation, each and every concrete pier must be meticulously checked. Mistakes can happen. That is one big reason why many pest control experts have turned to the award-winning Sentricon® System with Always Active™.

Sentricon® with Always Active™ uses bait stations which takes the guesswork out of termite detection. When worker termites come to attack a home, they find the bait, every time, because it is in their nature to continually explore for food. When they do, it is easy for pest control technicians to see it. More than this, Sentricon® with Always Active™ begins to immediately use worker termites against the colony that sent them. And, in most cases, eliminate the colony without any intervention from the technician.

No Nashville home should be without ongoing, always active protection from these sneaky wood-destroying insects. Get your protection in place today.